Copyright Basics for Educators and Students

This guide provides basic information about copyright, fair use, and educational exemptions in copyright law. Use the tabs to find additional copyright resources. 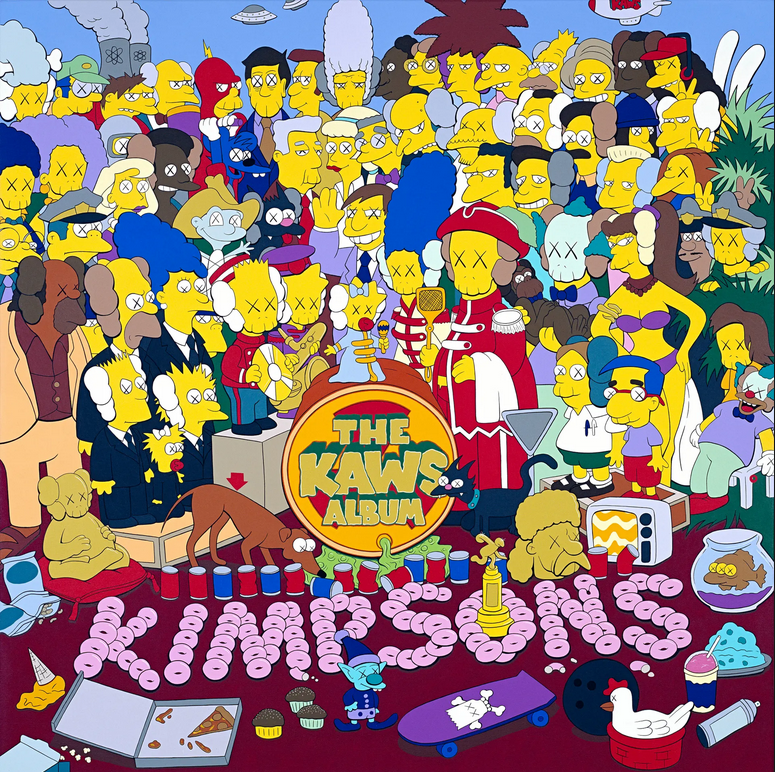 #1: Purpose & Character of the Use: this work is used to parody The Beatles’ 1967 album Sgt. Pepper’s Lonely Hearts Club Band. It is quite transformed - using KAWS Kimptons characters. Though they look quite similar to Fox's Simpsons, many of the folks in the album have large Xs over their eyes, puffy ears, and skull-like jaws.

#2: Nature of Copyrighted Work: this is a parody, appropriation of the original Beatles album. What else? This is supposed to be a parody.

#3: The Amount and Substantiality of Portion Used: there are many things that are similar about both the Simpsons and Sgt. Pepper's Lonely Hearts Club Band. BUT! KAWS has changed the title of work, album ("The KAWS Album), changing Simpsons to Kimpsons. Many of the figures seem similar, but because KAWS has joined together two genres that have been significantly changed, he is within Fair Use.

#4: Effect of the Use on the Market: KAWS is an artist whose works sell from hundreds of thousands of dollars to millions and because the consumers of "The Simpsons" and fans of "The Beatles" are not going to use this in place of the TV show or to substitute the album cover. So, because KAWS is not going be replacing or impacting the market for either industry, he is within fair use.

Fair Use? Koons vs. Rogers

#1: Purpose & Character of the Use: The use of Koons sculpture was to make art and money. Koons did alter the work slightly, but not to a degree to the court's liking (anyone can see that the photo is very similar to the sculpture). Koons changed color of the dogs, added flowers to the characters and to the dogs mouths. Can you see anything else?

#2: Nature of Copyrighted Work: Qualities and attributes that support fair use include altering the photo into a sculpture, though it is very similar still. Because the original, "Puppies" was a creative work in itself, it has greater protection.

#3: The Amount and Substantiality of Portion Used: As we mentioned above, there isn't much that is changed between the two works. The "heart of the work" is to alter the photograph and sell to make a profit. Koons, as shown in the quote below, did not have completely innocent ideas when transforming this work. "After buying the card, [Koons] tore off that portion showing Rogers' copyright of "Puppies." Koons saw certain criteria in the note card that he thought made it a workable source."

#4: Effect of the Use on the Market: "Puppies," the photograph on the far left, was used in greeting cards versus the sculpture from an art show. Because these markets typically do not overlap, this factor would balance towards fair use, but because the other factors balance away from fair use, the court ruled in favor of Rogers.

Koons acknowledges that the source for "String of Puppies" was a Museum Graphics note card of "Puppies" which he purchased in a "very commercial, tourist-like card shop" in 1987. After buying the card, he tore off that portion showing Rogers' copyright of "Puppies." Koons saw certain criteria in the note card that he thought made it a workable source.

Appellant (Koons) gave his artisans one of Rogers' note cards and told them to copy it. But in order to guide the creation of a three-dimensional sculptural piece from the two-dimensional photograph, Koons communicated extensively with the Demetz Studio. He visited it once a week during the period the piece was being carved by the workers and gave them written instructions. In his "production notes" Koons stressed that he wanted "Puppies" copied faithfully in the sculpture. For example, he told his artisans the "work must be just like photo--features of photo must be captured;" later, "puppies need detail in fur. Details--Just Like Photo!;" other notes instruct the artisans to "keep man in angle of photo--mild lean to side & mildly forward--same for woman," to "keep woman's big smile," and to "keep [the sculpture] very, very realistic;" others state, "Girl's nose is too small. Please make larger as per photo;" another reminds the artisans that "The puppies must have variation in fur as per photo--not just large area of paint--variation as per photo." (emphasis supplied).